How to Be a Music Video Director 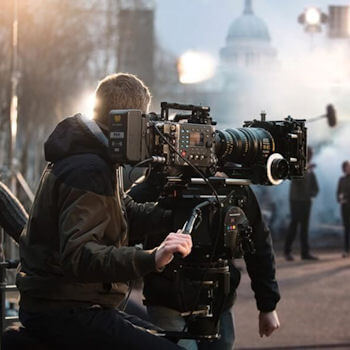 Equipping Yourself to be a Music Video Director

1. Learn the basics of film-making with photography. Many directors and film producers get their start in photography. Photography will introduce you to the basics of many important aspects of film making, like the different kinds of lenses, shot composition, lighting effects, and framing.

Even while learning basics with still photography, you should begin to orient yourself in the genre you are most interested. For example, if you like thrash metal, you might take pictures of or for a local thrash band to get a better feel for capturing that kind of image.

In many cases, you can get permission to take pictures of local or lesser known bands by offering free copies of your photography.

2. Purchase suitable equipment. Filming equipment is notoriously expensive, so you'll have to take time determining which camera will be the best for your situation and budget accordingly. It's likely you'll also have to account for the cost of lenses, which can add several hundreds of dollars of expense to your purchase. Some recommended cameras include:

Canon EOS M is a very economic model that also has an HD movie mode for shooting in high definition. If cost is a significant factor for you, this may be your best option.

Canon EOS Rebel T2i is one of the best mid-cost cameras for shooting music videos. It also has a dim light mode, making it suitable for many different kinds of lighting environment. The videos you make with this will look professional, no matter the content.

Nikon D5200 is the most expensive of these three models. It has excellent features for music video shooting, like it's 24.1 megapixel CMOS sensor and 5 FPS continuous shooting, though you'll definitely need to budget for a lens for this one.

In many cases, you can buy refurbished or like new models from electronics stores, pawn shops, or online for a fraction of the retail value. However, you should be wary when you go this route. Some "like new" cameras have damage that isn't obvious.

3. Produce amateur music videos with your friends. This will prepare you for learning how to set up and direct the action of a scene. The professional side of video production can be very demanding, and working with your friends will allow you a safe place to make mistakes and learn from them.

Depending on the quality of these videos, you might want to upload them to your YouTube channel to see if you can gain some popularity and reputation.

You might consider putting together a video in the style of a flash mob, or you could involve your school/local theatre group to acting out a simple story to a popular song.

4. Study different genres of music video. If you want to become a truly great music video director, you should expose yourself to other great videos to learn from them. This way, you'll be able to talk about and deconstruct the differences between different styles of music video. While watching, be on the lookout for things like:

The use of lighting in the video. How does it affect the atmosphere of the video? How do you think you can replicate the effect? Is there a mix of hot (strong, bright) and soft (diffused, dim) lighting effects?

The framing of the video. Framing is generally considered to be the way the shot brings focus to the subject. In what ways is the subject defined in your favorite videos? How do shapes or other elements (light, shadow, environment) bring attention to the subjects in the video?

5. Take a class. In many cases, there are photography/film classes offered at local community centers, community colleges, and universities. You can attend these to give yourself more formal knowledge about shooting and film making. You'll likely want to focus on the technical side of things, like a class on lighting effects, as an example.

If you live in a major city that has regularly produced photography/film media, you might be able to volunteer your time doing on-set tasks to get real exposure to the industry. For instance, you might volunteer to run food and drink to talent at your local news studio.

Consider going to film school for a bachelors degree in film.

1. Shoot amateur music videos for local bands. In some cases, you may even be able to convince somewhat popular though still relatively unknown bands to allow you to shoot their music videos. This will help you learn how to manage the expectations and on-camera movements of band members, and could result in suitable material for your demo reel.

2. Polish your editing skills. Not all directors are skilled at film editing, but having a general knowledge of it will help you to coach the editors you work with to your desired result. Take some time to play around with film editing software until you are comfortable with the basics. Also, you should always make sure any finished productions are well-edited.

You may want to consider taking a class on film editing, specifically. There's a great deal of psychology that goes into piecing together a story from separate shots, and knowing this can put you ahead of the curve.

3. Enter prominent video competitions to build your reputation. In particular, on-spec/brand competitions should receive priority, as these generally are more highly regarded than others. Try not to get discouraged if it takes you a while before you see any success at one of these. Competition can be fierce.

Keep improving upon your method and techniques as you make videos for competitions. Critique can be difficult to hear, but can result in drastic improvements.

When you finally win or achieve a "shortlisted" or "runner up" ranking, you should include this information in any bio, personal statement, or resume you submit. These sorts of awards serve as proof that you are a serious film maker.

4. Make a demo reel. Your demo reel is a short clip that shows prospective clients/employers what you can do as a music video director. It should include clips of your finest work, and shouldn't exceed more than 90 seconds in total length. It should be specific to the line of video production that you want to work in, like pop, heavy metal, or country.

These reels can either contain short snippets of many different scenes, or a few longer samples strung together.

Don't forget to include your name and contact information in your demo reel. While trying to craft the perfect demo, this can be easily overlooked.

Signify your roles during shooting with headings. For example, if you directed and also creates models for the scene in your demo reel, you might include the text "Lead Modeler" in one of the lower corners of the shot where it won't distract from the scene.

Breaking in to the Music Video Scene

1. Utilize social media. Social media, like Twitter, Facebook, and YouTube, are free ways that you can build your fanbase and increase your exposure. As your popularity among users grows, you'll notice that larger companies and labels will take you more seriously.

Many bands and video production companies look favorably on a large YouTube or Twitter following due to the fact that you'll be adding your fanbase to their own.

2. Network with local music artists. Local artists will also be trying to break into the industry, so they may have connections that could be useful to you on your journey to becoming a music video producer. A simple business card can help you appear more professional while providing your contact information.

Through social networking sites, you may be able to find the email addresses of PR representatives or other decision makers at music video production companies. A brief email introducing yourself or with a proposal could result in a potential gig.

Social media is sometimes a "back door" to companies or groups that are difficult to get in touch with. You might announce on Twitter that you're looking for a new music video project and see if anyone bites.

If your editing ability is weaker than your directing skills, you may want to hire a professional video editor to help you put together the most impressive video reel possible.

4. Take a position with a production company. Oftentimes, you won't be able to get your desired position right from the start, but that doesn't mean you can't work your way up to it. Running food or helping with lighting can turn into an assistant directorship or stage managing position. From those positions you'll have a better shot at directing.

When working from the bottom up, you'll often have to put in extra work to prove yourself. Be honest with your goals with other staff and your supervisors, and show them you are serious by putting forth your best effort.

You should try to angle for any position that works closely with a director, like as a director's assistant or secretary. This way, you'll have more opportunity to watch a professional in action.

5. Identify moneyed companies suitable for your demo reel. It takes money to produce a music video, and by targeting profitable music companies in your genre, you'll stand a better chance of getting an offer to direct. Look for companies that are actively producing music videos, as this is often a sign of financial health and stability.

Tags: How To, Music