How to Deal with Motion Sickness on Rides 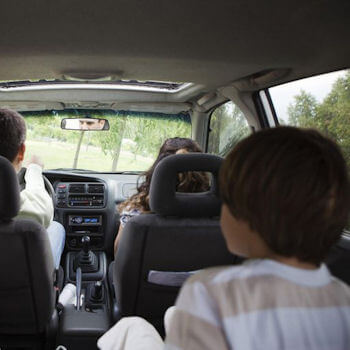 Motion sickness on amusement parks rides takes the amusement right out of the experience. Our eyes, inner ears, muscles, and joints senses these motion changes and transmits the information to our brain. When the ride begins to rock, these different parts of our bodies send different information, which disorients our brains and leads to queasiness, dizziness, and in the worst situations, projectile vomit. Roller coasters aren’t the only place that this can occur, so the advice for dealing with motion sickness on rides is applicable to boats, trains, planes, and motor vehicles. In order to overcome motion sickness, you can take medication or adjust other aspects of your life that might exacerbate motion sickness, like diet and body position.

1. Get some over-the-counter dramamine. Dimenhydrinate (Dramamine, but brand names vary) is an antihistamine drug that can be purchased at most grocery stores and pharmacies. These drugs block receptors in the brain associated with nausea and vomiting. You can purchase dramamine in two tablet forms — drowsy and non-drowsy. Non-drowsy is best for amusement parks. If you are taking a train or a plane long distance and can sleep, the drowsy kind will work well.

There are a few other similar medications used for motion sickness. check with your doctor or pharmacist on which medication may be best for you.

2. Acquire a scopolamine patch. You’ll need to see a doctor to get a prescription for this medication. Generally, this medication is saved for those who aren’t helped by dramamine. Most of the time, scopolamine is administered in a patch form.

Talk to your doctor about potential side effects of this medication, which can include drowsiness, disorientation, dry mouth, or hallucinations.

3. Apply a scopolamine patch. The patch should be applied as directed on the package. Normally, it should be placed on the back of the ear, at least four hours prior to when it is actually needed. Wash behind your ear before applying. Remove the patch from the protective packaging. Place on the skin. Wash your hands thoroughly afterwards. Leave on for as long as you need it or as long as the package prescribes.

4. Try some ginger supplements. Ginger (zingiber officinale) is cheap and effective. You can consume ginger raw or in lozenge/pill form. You can purchase ginger at any grocery store or pharmacy.

If you want to take raw ginger before you get on a ride, just peel it and dice it into a small cube. Picture a piece of gum and try to make your raw ginger resemble that size. Know that many find the aftertaste of ginger to be pungent and generally unpleasant. If this is you, choose the pill or lozenge form.

1. Eat something to settle your stomach. Either before you get on the ride or when you get off the ride, find somewhere to eat something that will soothe your stomach, like crackers or ginger ale. Bland food, high in carbohydrates and low in fats are best for motion sickness. Eat foods with ginger in them or breads, cereals, grains, or fruits.

5. Reduce your activity. Simplicity is best for motion sickness. Obviously, this doesn’t really apply to amusement park rides, where multitasking is nearly impossible. But on planes, trains, boats, or in cars, try to do less. Stop reading your book or watching a movie. Just sit back and relax to cure motion sickness.

6. Apply pressure to your P6 point. The acupuncture point known as Pericardium 6 is said to relieve general nausea. It is on the inside of the wrist, a little more than an inch up the arm from the center of the wrist crease. Many travel stores sell wristbands with built in buttons that apply pressure to this point. Scientific studies have shown the effectiveness of this method on motion sickness.

There is still some debate as to whether the pressure point or the act of pressing the point helps reduce nausea. Either way, give it a try.

Tags: How To, Driving