How to Hook Up Jumper Cables 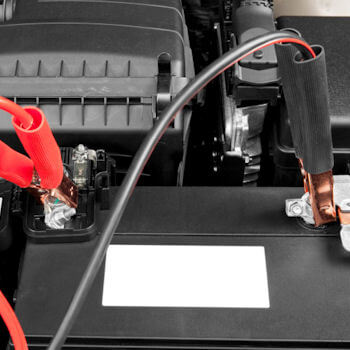 Your battery can be too weak to start your car for a number of reasons, including a loss of charge from cold weather, age, or leaving the lights on overnight. Whatever the cause, you can use jumper cables to connect the dead battery to a live one. Make sure both batteries are the same size, then carefully begin clamping the cables in place. The dead battery may then receive enough of a charge to get the car started again.

Check the owner’s manual if you are unable to locate the battery. It should tell you where the battery is and how to access it.

The emergency brake may be located near the gear stick or gas pedal.

3. Turn the cars off and remove the keys. Make sure the donor car is completely off. You should hear the engine shut down and can test the radio to see that it doesn’t have any power running to it. Also take the key out of car with the dead battery so it can’t start up when the jumper cables are attached.

Doing this protects both engines from power surges and reduces the risk of electrical shock.

3. Check the batteries to make sure they are the same voltage. The voltage will be printed in a visible location, usually on a white or yellow sticker on top of the battery. It will say something like “12V.” The live battery needs to match the dead battery or else it can send a dangerous current that burns out the car’s systems.

Batteries with similar voltages will be the same size. Still, look for the voltage on the label to avoid possible damage.

If you aren’t sure about using a battery, avoid the risk if possible. Try to find a different donor battery or use a rechargeable battery pack.

Check the terminals for corrosion first. It looks like white, green, and blue powder. Clean the terminals by wiping them with a rag or wire brush.

1. Separate the jumper cable clamps by laying them on the ground. Position the cables flat on the ground, stretching them out between the 2 cars. Move the clamps so they aren’t touching each other. Any accidental contact can cause your car’s electrical system to short circuit.

Leads on jumper cables are often made in different lengths to prevent them from touching. If they are the same length, make sure they have not been modified or damaged in any way.

2. Clamp a red clamp to the positive terminal of the dead battery. Leave the rest of the jumper cable on the ground as you bring the clamp over to the car. Double-check the “+” and “-” labels on the battery before attaching the clamp. Squeeze the clamp to open it, then fit it securely around the metal terminal.

On some vehicles, you may have to remove a plastic cover from the positive battery terminal before you can make this connection. You remove it by twisting it counterclockwise by hand.

Connect each clamp 1 at a time. Go slowly in order to avoid mistakes that can damage the vehicles.

3. Secure the other red clamp to the positive terminal on the donor battery. Carry the clamp to the other car so you can fit in on the correct terminal. Make sure it is secure so it won’t slip off when the engine is activated later.

If you attach a clamp incorrectly, stop before you start the cars. Remove the clamps carefully, working 1 at a time to avoid touching them together.

5. Clamp the other black lead to an unpainted metal surface in the car. The black clamp does not connect to a battery terminal. Instead, find a spot such as a clean bolt in the engine block. You may also place the clamp on an unpainted part of the car’s body underneath the hood.

Avoid connecting this clamp to the dead battery unless you have no other choice. This produces a spark that can ignite hydrogen fumes after the car is turned on.

Don’t dig too far down to find a metal surface. The fuel lines are down there and you are better off keeping the clamp away from them.

Make sure the jumper cable doesn’t hang down into the engine compartment, since it can get caught by the moving parts there.

1. Start the donor vehicle and let it idle for a few minutes. Use the ignition key to start the engine. The electrical systems, such as the lights and radio, will start while electricity flows to the dead battery. Give the battery at least 30 seconds to build power before you attempt to start the other car.

Depending on the dead battery’s age and condition, it may require more time to charge.

Step on the gas pedal to run the RPM up to about 3,000 if you want to drive more power towards the dead battery.

2. Turn on the dead car’s engine. Turn the key in the ignition to activate the car. Right away, the electrical systems should activate. If the lights, radio, or other electrical components don’t come on, you may need to give the battery more time. Shut off the car, make sure the cables are attached properly, and then try revving the working car to increase the power supply.

If the car doesn’t start after repeated attempts, your car may have a different problem. It could have a blown fuse.

If the car’s lights come on but the engine won’t start, the battery is fine. You may hear the engine make a clicking noise as you try to start it. This could be because of a faulty starter.

Leave the car running so it has time to continue charging or else you will need to jump it again.

Be careful when handling the cables. Make sure the clamps do not touch until all of them are removed from the batteries.

Tags: How To, Driving