How to Unwobble a Bicycle Rim 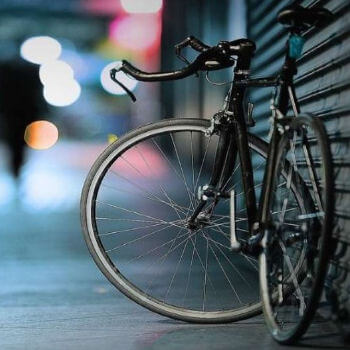 The best way to make sure a bicycle rim stops wobbling is through using a method called "truing" the wheel. The spokes on your bike all work together to keep the rim straight, each own pulling in a slightly different direction at the same force in order to keep the wheel straight. Because there are so many spokes to account for, this makes truing a tricky art form. But, if you're patient and go slowly, it is still very doable for any burgeoning bike mechanic.

Fixing a Lateral (Side to Side) Wobble

1. Flip bike upside down, or put the wobbly wheel in a truing stand if you have one. You need to be able to spin the wheel freely, allowing you to see where it wobbles and make subtle changes. Usually, turning the bike upside down is more than enough, but precise mechanics can use a truing stand, which holds the wheel in place and has small calipers that let you notice even the smallest wobble.

If you've got a serious wobble or issue, it can help to take the tire off first. At the very least, take some air out of the tires. If not, one will likely pop while you work.

Looking to protect your beautiful wheels from marks? Take a small piece of masking tape and use it to make the spots where there is some wobble.

3. Understand how spokes are tightened and turned. The way you tighten spokes seems a little counter-intuitive at first, since you'll be turning spokes on both the top and bottom of the wheel. It seems like it's breaking the "righty-tighty" rule you've grown up with, but there is an easier way to think about it. Imagine you're looking straight down at the top of the spoke where it meets the rim. If you were to take a screwdriver and stick it into the top of the spoke, you would turn the spoke clockwise, like normal, to tighten it, and counter-clockwise to loosen it. If you're ever in doubt, imagine which direction you would turn this screwdriver, and turn accordingly.

4. Grip the spokes around your problem area and squeeze lightly, checking for looseness. If you're not sure what "loose" is, feel your other wheel or the spokes on other sides of the wheel. While not all wobbly wheels have noticeably loose spokes, most do, which will point out the exact spoke where there is an issue. If a spoke is extremely loose, tighten it until it is about the same tension as those around it.

If a spoke is extremely loose, you should still go ahead and try to fix it. That said, you may need a new rim if this happens regularly-- it should be a rare occurrence.

There are rare cases where a spoke feels too tense, which can cause a wobble as well. The technique to fix it (shown below) is the exact same, just with loosening instead of tightening.

5. Note which side each spoke pulls towards to find the ones causing your wobble. The spokes will alternate which side of the rim they go to -- half to the left, half to the right. The balance between these two sides is what keeps your wheel true and prevents wobble. So, if your wheel wobbles to the left, that means the spokes on the right side are too loose to keep things balanced, or the spokes on the left are too tight. This is why you only get wobbles in certain areas -- one spoke that is too loose only affects the wheel in the precise spot.

Trace the spoke down from the rim down to the center of the wheel to see which side it pulls towards.

6. Tighten the spoke just below your problem area with a half-turn of the nipple. The golden rule of rim truing is go slow. Using your spoke wrench, a small tool with notches made to fit perfectly around the "nipple," the small sheath where the spoke meets the rim. Tighten it with a half-turn clockwise, then check again. Remember -- go slowly! This first turn won't fix the issue immediately, but don't keep turning just yet. Don't have a spoke wrench? A pair of needle-nose pliers will work in a pinch, but you should buy a spoke wrench cheaply as soon as you can.

Remember to get the right side! If the wobble is to the left, you need to tighten the spoke that pulls the rim back to the right.

7. Loosen the two spokes next to the one you just tightened, using only quarter-turns. This is how you keep the radial tension (up and down the rim, keeping it perfectly round) even without too much work. Say you just tightened a spoke on the right side of the rim, because it wobbled to the left. On either side of this spoke are two more spokes for the left side of the rim. Instead of continuing to crank on the right side, which can put too much pressure on one spoke, just loosen the spokes that pull it to the left. By using just a quarter turn on each spoke, you undo the same amount of tension on the left that you just added to the right, further balancing your wheel.

Keep this simple math equation in your head as you work -- "if I tighten one spoke, I need to loosen the two spokes next to it half as much to make sure it stays balanced." The opposite equation, loosening one spoke and then tightening the other two half as much, also applies.

9. Continue this 3-spoke adjustment process until the wobble is gone. You may need to take another set of three spokes and do the same thing. Just remember to keep the forces even, balancing out every adjustment on both sides. Never turn more than a half-turn at a time, and only work on one set of spokes at a time, allowing your to quickly undo something if you make a mistake.

You will likely get smaller and smaller adjustments as you work -- using only turning the nipple by small increments. At this point, you should be spinning the wheel after every tightening, making only the smallest adjustments until you hit perfection.

10. Check for "flat spot" wobbles, or a bike that is not "radially" true. The most common issue is when the rim wobbles left to right, but bike tires can also wobble up and down as well, forming egg-shaped wheels or small flat spots where the tension isn't quite right up and down. After fixing the rim from side to side, make sure you didn't accidentally pull the wheel out of radial true as well. Usually, you'll have a few simple adjustments to make, but they should be easy.

Fixing Radial (Up and Down) Wobbling

1. Check that the bike is laterally trued first, as best as you can get it. You'll always want to finish laterally truing the bike before attacking a radial wobble. Radial wobbling is when the bicycle rim loses its perfectly round shape, and you can usually feel a little bump when riding. This has more to do with the overall tension on the bike and is easier to fix once you've got side-to-side areas ironed out.

2. Spin the rim and watch it from the side, noting any high spots using calipers or your fingers. Spin the bike and place your finger, a marker, or a set of calipers underneath the wheel, just below where it would touch the tire. Then spin the wheel and note where it rubs against the caliper. This is where the rim has elongated, and you'll need to pull it in to get this bump out of the rim.

3. Tighten the two spokes that are on either side of the rubbing area with a half turn. One of these spokes will go to the right side of the bike, the other to the left, so tightening them both equally will pull the high spot in without ruing your radial truing.

4. Move the calipers, pen, or your finger closer in, spin the wheel, and adjust as needed. Keep working these two spokes until you've pulled the rub out of the rim, using smaller and smaller are turns (like a quarter-turn) to get more precise truing. After every set of turns, spin the wheel and double-check the lateral truing again, making sure you've not introduced a new wobble.

5. Check that parts of the wheel don't dive inwards now, making flat spots, and loosen as necessary. This often happens on the opposite side of the wheel as the part you're working on, but it is an easy fix. Just find the two spokes on either side of your low spot and loosen them with quarter turns until you're even again.

1. Know when a rim is damaged and not simply out of true. If your wheel can't stay in true, shows noticeable bending or denting, or your spokes won't stay tight, you'll need a new wheel. Oftentimes you'll need to true a wheel after a crash, which can loosen spokes, but it is not always possible. If you find yourself working and working without results, the rim is likely shot.

2. Tighten any extra-loose spokes until they feel as tense as the rest, then make the finer adjustments. The half turn, two quarter turn system won't work if the spoke is noticeably looser than the rest. Simply tighten this spoke on its own until it feels about as tight as the spokes around it, then move on to the more precise adjustments.

4. Replace any broken spokes as soon as you can, as one broken spoke often leads to more. When you lose a spoke, you can keep riding for a bit if you have not other option to get home. But the increased pressure on the other spokes will warp and bend your wheel if left for too long, eventually causing more spokes to break and potentially ruining your rim permanently.

Tags: How To, Bikes