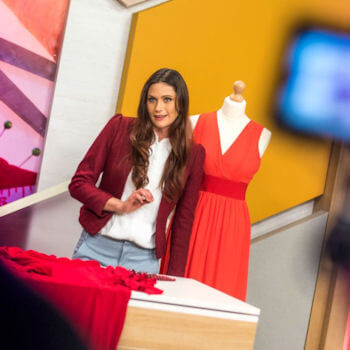 An infomercial is a form of television commercial, which generally includes a toll-free telephone number or website. Most often used as a form of direct response television (DRTV), long-form infomercials are typically 28:30 or 58:30 minutes in length. Infomercials are also known as paid programming (or teleshopping in Europe). This phenomenon started in the United States, where infomercials were typically shown overnight (usually 2:00 a.m. to 6:00 a.m.), outside peak prime time hours for commercial broadcasters. Some television stations chose to air infomercials as an alternative to the former practice of signing off. Some channels air infomercials 24 hours. Some stations also choose to air infomercials during the daytime hours mostly on weekends to fill in for unscheduled network or syndicated programming. By 2009, most infomercial spending in the U.S. occurred during the early morning, daytime and evening hours, or in the afternoon. Stations in most countries around the world have instituted similar media structures. The infomercial industry is worth over $200 billion.

While the term "infomercial" was originally applied only to television advertising, it is now sometimes used to refer to any presentation (often on video) which presents a significant amount of information in an actual, or perceived, attempt to promote a point of view. When used this way, the term may be meant to carry an implication that the party making the communication is exaggerating truths or hiding important facts. Often, it is unclear whether the actual presentation fits this definition because the term is used in an attempt to discredit the presentation. Hence, political speeches or conventions may be derogatorily referred to as "infomercials" for a specific point of view.

The word "infomercial" is a portmanteau of the words "information" and "commercial". As in any other form of advertisement, the content is a commercial message designed to represent the viewpoints and to serve the interest of the sponsor. Infomercials are often made to closely resemble standard television programs. Some imitate talk shows and try to downplay the fact that the program is actually a commercial message. A few are developed around storylines and have been called "storymercials". However, most do not have specific television formats but craft different elements to tell what their creators hope is a compelling story about the product offered.

Infomercials are designed to solicit a direct response that is specific and at once quantifiable and are, therefore, a form of direct response marketing (not to be confused with direct marketing). For this reason, infomercials generally feature between two and four internal commercials of 30 to 120 seconds, which invite the consumer to call or take other direct action. Despite the overt request for direct action, many consumers respond to the messages in an infomercial with purchases at retail outlets. For many infomercials, the largest portion of positive response is for consumers to take action by purchasing at a retail store. For others, the advertiser will instead promote the item as "not sold in stores." Some advertisers who make this choice dislike sharing profit with retailers, while many simply lack the immense resources necessary to get their products into the retail industry channels prior to achieving on-air success. In the latter case, many hope to use profit from direct sales to build their business/company in order to achieve later retail distribution. Standalone shorter commercials, 30 to 120 seconds in length with a call to action, are erroneously called infomercials; when used as an independently produced commercial, they are generally known as DRTV spots or short-form DRTV. Many products and services that advertise using infomercials often also use these shorter spots to advertise during regular programming.

Major brands (such as Apple, Microsoft and Thermos-Grill2Go) have used infomercials for their ability to communicate more complicated and in-depth product stories. This practice started in the early 1990s and has increased since. Such advertisers generally eschew the less reputable trappings of the traditional infomercial business in order to create communication they believe creates a better image of their products, brands and consumers. Apple's use of the infomercial medium was immediately discontinued with Steve Jobs' 1997 return to the helm of the company.