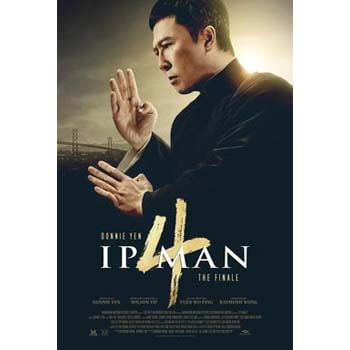 Ip Man 4: The Finale is a 2019 Chinese martial arts film directed by Wilson Yip and produced by Raymond Wong. It is the fourth and final film in the Ip Man film series based on the life of the Wing Chun grandmaster of the same name and features Donnie Yen reprising the role. The film began production in April 2018 and ended in July of the same year. It was released on 20 December 2019.

In 1964, following the death of his wife, Ip Man discovers he has throat cancer due to smoking. After his rebellious son Ip Ching fights back against a bully and is expelled, Ip decides to travel to San Francisco to look for a school. His student, Bruce Lee, has upset the local martial arts community in San Francisco by opening a Wing Chun school, teaching the Americans martial arts and writing an English language book on martial arts. He discovers from an associate and his friend, Liang Gen, that a referral letter from the Chinese Consolidated Benevolent Association is needed to enroll into a school. Wan, the president of the Association, refuses to write the letter as Ip does not agree with the grandmasters' opinions on Lee's actions. After a brief fight with Wan where they test each other's Kung fu, he leaves.

While leaving the school after a meeting with the principal, he chances upon the daughter of Wan, Yonah, being bullied by a rival cheerleader, Becky, and her friends. Ip saves her and escorts her home, with Becky accidentally cutting herself with a pair of scissors. Wan accuses Ip of using his daughter to get the letter and challenges him to a fight for it. The fight is disrupted by an earthquake, and Wan tells Ip they will finish their fight at the upcoming Mid Autumn Festival. Ip refuses, explaining that he merely escorted his daughter home for her safety and leaves.

Becky complains to her parents that she had been bullied. Her father Walters, who is an officer of the Immigration and Naturalization Service, is pressured into holding the Association responsible and deporting all Chinese associated with them. Meanwhile, Hartman, a Staff Sergeant in the United States Marines, attempts to convince Barton Geddes, the Gunnery Sergeant, to incorporate Chinese martial arts into their hand-to-hand combat training. Geddes proves that the Marines' current Karate training is superior by asking him to fight the Marines' Karate instructor, Colin Frater, who defeats Hartman. Hartman later manages to convince the Commanding Officer about doing so and is instructed to film the Mid Autumn Festival happening at the Association for research, which upsets Geddes.

Geddes asks Frater to challenge the grandmasters at the Festival, defeating a few of them until Ip interferes and defeats him badly. Meanwhile, Wan, who was supposed to be present at the festival, is arrested by the immigration officers. Upon seeing Frater defeated, Geddes barges into the Association to find out where Wan is kept and defeats everyone there. He then threatens Walters to release Wan into the Marines' custody before bringing Wan into the camp to fight him. Due to a tip-off by a student of Lee, the Association is left empty by the time the immigration officers raid the place. Lee provides refuge for the Association, earning their respect.

Wan puts up a good fight but is outmatched and seriously injured. Ip, filled with emotions, finally reveals to his son that he has cancer, which finally allows him to talk to his father over the phone after many attempts by Ip. Ip is brought into the Marines' camp by Hartman, and defeats Geddes in a fight.

Wan has already prepared the letter for Ip man, but the latter said that he does not intend to move to San Francisco as he does not like the place. Ip reconciles with his son. A strong but weary Ip instructs his son to film him as he demonstrates Wing Chun on the wooden dummy.

In 1972, Ip succumbs to his cancer at age 79, and Lee pays respect to his master at the funeral. An epilogue reveals that the Marines had officially incorporated Chinese martial arts into their routine in 2001.