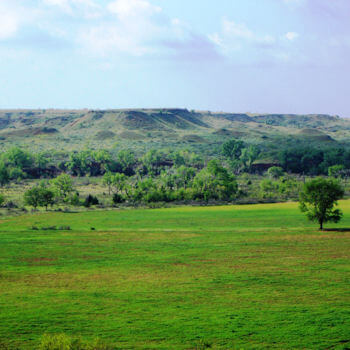 Land, sometimes referred to as dry land, is the solid surface of Earth that is not permanently covered by water. The vast majority of human activity throughout history has occurred in land areas that support agriculture, habitat, and various natural resources. Some life forms (including terrestrial plants and terrestrial animals) have developed from predecessor species that lived in bodies of water.

Areas where land meets large bodies of water are called coastal zones. The division between land and water is a fundamental concept to humans. The demarcation between land and water can vary by local jurisdiction and other factors. A maritime boundary is one example of a political demarcation. A variety of natural boundaries exist to help clearly define where water meets land. Solid rock landforms are easier to demarcate than marshy or swampy boundaries, where there is no clear point at which the land ends and a body of water has begun. Demarcation can further vary due to tides and weather.