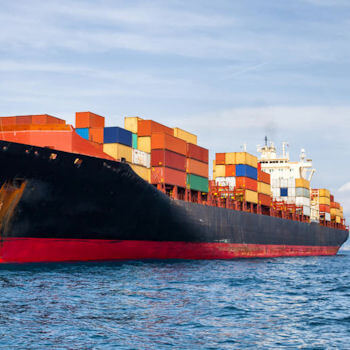 Maritime transport, fluvial transport, or more generally waterborne transport is the transport of people (passengers) or goods (cargo) via waterways. Freight transport by sea has been widely used throughout recorded history. The advent of aviation has diminished the importance of sea travel for passengers, though it is still popular for short trips and pleasure cruises. Transport by water is cheaper than transport by air, despite fluctuating exchange rates and a fee placed on top of freighting charges for carrier companies known as the currency adjustment factor (CAF).

Maritime transport can be realized over any distance by boat, ship, sailboat or barge, over oceans and lakes, through canals or along rivers. Shipping may be for commerce, recreation, or for military purposes. While extensive inland shipping is less critical today, the major waterways of the world including many canals are still very important and are integral parts of worldwide economies. Virtually any material can be moved by water; however, water transport becomes impractical when material delivery is time-critical such as various types of perishable produce. Still, water transport is highly cost effective with regular schedulable cargoes, such as trans-oceanic shipping of consumer products – and especially for heavy loads or bulk cargos, such as coal, coke, ores, or grains. Arguably, the industrial revolution took place best where cheap water transport by canal, navigations, or shipping by all types of watercraft on natural waterways supported cost effective bulk transport.

Containerization revolutionized maritime transport starting in the 1970s. "General cargo" includes goods packaged in boxes, cases, pallets, and barrels. When a cargo is carried in more than one mode, it is intermodal or co-modal.