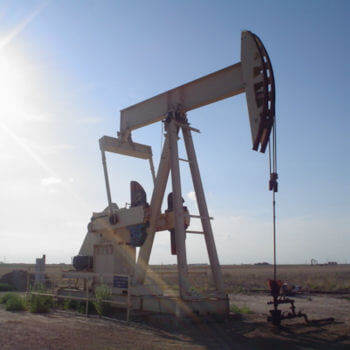 Petroleum is a naturally occurring, yellowish-black liquid found in geological formations beneath the Earth's surface. It is commonly refined into various types of fuels. Components of petroleum are separated using a technique called fractional distillation, i.e. separation of a liquid mixture into fractions differing in boiling point by means of distillation, typically using a fractionating column.

It consists of naturally occurring hydrocarbons of various molecular weights and may contain miscellaneous organic compounds. The name petroleum covers both naturally occurring unprocessed crude oil and petroleum products that are made up of refined crude oil. A fossil fuel, petroleum is formed when large quantities of dead organisms, mostly zooplankton and algae, are buried underneath sedimentary rock and subjected to both intense heat and pressure.

Petroleum has mostly been recovered by oil drilling (natural petroleum springs are rare). Drilling is carried out after studies of structural geology (at the reservoir scale), sedimentary basin analysis, and reservoir characterisation (mainly in terms of the porosity and permeability of geologic reservoir structures) have been completed. It is refined and separated, most easily by distillation, into a large number of consumer products, from gasoline (petrol) and kerosene to asphalt and chemical reagents used to make plastics, pesticides and pharmaceuticals. Petroleum is used in manufacturing a wide variety of materials, and it is estimated that the world consumes about 95 million barrels each day.

The use of petroleum as fuel is controversial due to its impact on global warming and ocean acidification. Fossil fuel phase-out, including petroleum, need to be completed by the end of 21st century to avoid "severe, pervasive, and irreversible impacts for people and ecosystems", according to the UN's Intergovernmental Panel on Climate Change.