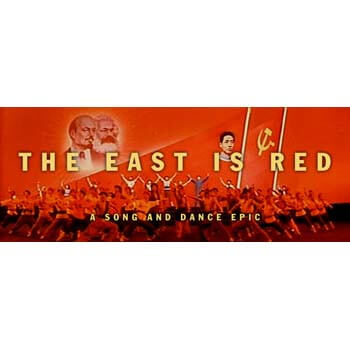 The East Is Red (simplified Chinese: 东方红; traditional Chinese: 東方紅; pinyin: Dōngfāng Hóng), is a 1965 Chinese film directed by Wang Ping. It is a "song and dance epic" dramatizing the history of the Chinese Revolution and the Communist Party under the leadership of Mao Zedong, from the beginnings of the May Fourth Movement, to the Civil War against the Nationalist Party, to the victory of the Communists and the founding of the People's Republic. The musical is commercially available today on both CD and video, as well as online with English subtitles.

The film is also known as The East Is Red: A Song and Dance Epic.

The musical depicts the history of the Communist Party of China under Mao Zedong from its founding in July 1921 to the establishment of "New China" in 1949. Detailed in the musical are several key events in CPC history such as the Northern Expedition (taken up by the Kuomintang (KMT) National Revolutionary Army with Chinese Communist and Soviet support), the KMT-led Shanghai massacre of 1927, the Nanchang Uprising and formation of the People's Liberation Army, the Long March, guerrilla warfare of the PLA during the Second United Front (during the War of Resistance Against Japanese Aggression), the subsequent overthrow of the National Government of the Republic of China on Mainland China by the PLA in the decisive phase of the Chinese Civil War, and the founding of the People's Republic on October 1, 1949.