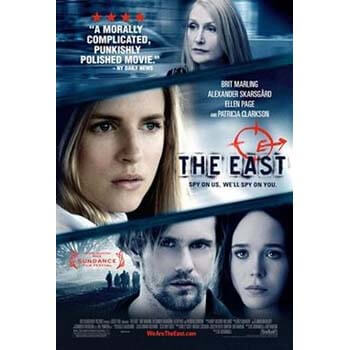 The East is a 2013 English-language film directed by Zal Batmanglij and starring Brit Marling, Alexander Skarsgård, and Ellen Page. Writers Batmanglij and Marling spent two months in 2009 practicing freeganism and co-wrote a screenplay inspired by their experiences and drawing on thrillers from the 1970s. The American studio Fox Searchlight Pictures had bought rights to distribute Batmanglij's previous film Sound of My Voice and also collaborated with the director to produce The East. With Ridley Scott as producer and Tony Scott as executive producer, Fox Searchlight contracted Scott Free Productions, headquartered in London, to produce the film. The East was filmed in two months in Shreveport, Louisiana at the end of 2011. The film premiered to strong reviews at the 2013 Sundance Film Festival on January 20, 2013. It was released in theaters on May 31, 2013.

Jane (Brit Marling), an operative for private intelligence firm Hiller Brood, is assigned by her boss, Sharon (Patricia Clarkson), to infiltrate The East, an underground activist, anarchist and environmentalist organization that has launched a vandalistic attack against a corporate leader and threatens two more as retribution for ecological crimes. Calling herself Sarah, she joins drifters in hitching train rides. When one drifter, Luca (Shiloh Fernandez), helps her escape from the police, she identifies the symbol of The East hanging from Luca's car mirror. Sarah self-inflicts an arm injury that she tells Luca was caused in the escape so he can get her medical attention. He takes her to a seemingly abandoned house in the woods where members of The East live and one of them, Doc (Toby Kebbell), treats her.

Sarah is given two nights to recover before she must leave. At an elaborate dinner involving straitjackets, Sarah is tested and fails, exposing how selfishly she and many others live their lives. Sarah is caught spying one night by the deaf Eve and talks in sign language with her. Sarah tells Eve that she is an undercover agent and threatens Eve with jail if she stays; Eve leaves the next morning. Sarah is recruited to fill the missing member's role on a "jam", an old fashioned term for direct action. Sarah reluctantly participates in The East's next jam and learns that the group's members have all been damaged by corporate activities. For example, Doc was poisoned by a fluoroquinolone antibiotic and his neurosystem is degenerating. The East infiltrates a party for the antibiotic company's senior executives and adds the antibiotic to the champagne. The East announce this via YouTube: one executive's health begins to fail, revealing the drug's side effects. After seeing the jam's effectiveness, compounded by her attraction to charismatic Benji (Alexander Skarsgård), Sarah questions the morality of her job.

Another member, Izzy (Ellen Page), is the daughter of a petrochemical CEO. The group uses this connection to gain access to him and forces him to bathe in the waterway he has been using as a toxic dumping ground. This goes wrong when security arrives and shoots the fleeing Izzy. At the squat, Doc's hands tremble too much for him to perform surgery. Working under his guidance, Sarah manages to remove the bullet but Izzy dies. This is the catalyst for Sarah and Benji's romance. They make love. At Izzy's burial near the house, her body lies nude and decorated with blossoms in a nod to the romance and the sea change it portends.

Sarah implores Benji to leave but he insists they participate in a fourth and final jam. Sarah initially refuses but gives in. When she awakens after sleeping in the car, she realizes that Benji is driving her to Hiller Brood's headquarters. He reveals that he has always suspected her of being a spy, as did Luca, who brought her in as a test. Benji wants Sarah to obtain a NOC global list of Hiller Brood agents, to "watch" them. Having copied the list on to her cell phone's memory card, Sarah runs into Sharon and confronts her about the firm's activities, revealing her new allegiances. Sharon has Sarah's cellphone confiscated as she leaves. As Hiller Brood had been sharing information with the FBI, The East's hideout is raided and Doc is arrested but sacrifices himself to ensure the remaining members escape. Sarah tells Benji she has failed to get the NOC list which Benji reveals he meant to use to expose the undercover agents, even though that meant they could be killed. Sarah chooses not to go on the run and they part as Benji heads out of the country. In truth, Sarah still has the list because she had swallowed the memory card. The film ends with an epilogue of her contacting her undercover former coworkers and informing them of the corporate crimes Hiller Brood's clients want to protect. She is thus using a peaceful approach to promote The East's goals.