'Til There Was You 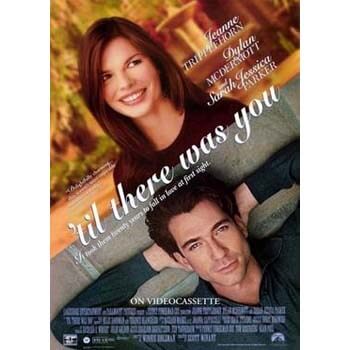 'Til There Was You is a 1997 American romantic comedy film directed by Scott Winant and starring Jeanne Tripplehorn, Dylan McDermott, Sarah Jessica Parker and Jennifer Aniston. The screenplay, written by Winnie Holzman, traces thirty-odd years in the parallel lives of two people whose intertwined paths finally converge when their mutual interest in a community project brings them together.

Gwen Moss (Jeanne Tripplehorn) has spent the better part of her life waiting for the man of her dreams, unaware she briefly bumped into him at school as children and has had several close encounters ever since. She aspires to have a life like her longtime friend Debbie (Jennifer Aniston), a successful doctor with a beautiful home but a marriage that may not be as perfect as it seems on the surface.

Gwen is hired to ghostwrite the autobiography of former child star Francesca Lanfield (Sarah Jessica Parker), whose career virtually ended following her stint on a long-running Partridge Family-Brady Bunch hybrid sitcom. Francesca owns La Fortuna, a picturesque vintage apartment complex (filmed at the historic El Cabrillo). Architect Nick Dawkan's (Dylan McDermott) boss Timo wants to buy and demolish the complex so his firm can construct a modern condominium development in its place. Francesca agrees to the sale as long as Nick is placed in charge of the project, and the two embark on a somewhat tempestuous relationship. Both are damaged emotionally; Francesca has overcome an addiction to drugs but still craves the spotlight, while Nick is dealing with the memory of a father who failed as a songwriter and became a hopeless alcoholic. Meanwhile, Gwen is shocked to discover her father Saul never loved her mother Beebee and is devastated when the two decide to divorce. Her parents' story of how they met from her childhood turns out to be false: Saul got stood up by his date that night and Beebee thought that he was interested in her. They only married to "avoid an argument", as Saul puts it.

Gwen moves into La Fortuna and finds herself surrounded by an assortment of odd but lovable neighbors who have created a family of their own. When the tenants are presented with eviction notices, they decide to fight back. Having discovered the property was designed by Sophia Monroe, one of the first female architects of note (and coincidentally Nick's mentor during the early stages of his career), and served as home to silent film star Louise Brooks, Gwen hopes she can have it declared an historical landmark with the assistance of Jon Haas, the city councilman she is dating. Nick is prepared to fight for his firm until he sees La Fortuna and learns its history and decides it might be worth preserving after all. Though ultimately unsuccessful in preserving La Fortuna, they finally meet at the Nicotine Anonymous meeting, are then happily married, and have a daughter together.